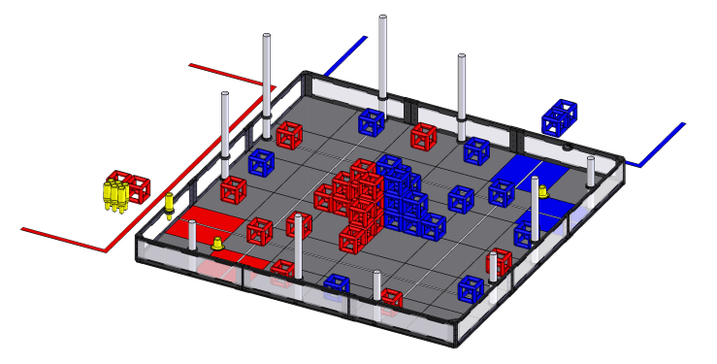 VEX Skyrise is played on a 12’x12’ square field configured as seen above. Two alliances – one “red” and one “blue” – composed of two teams each, compete in matches consisting of a fifteen second autonomous period followed by one minute and forty-five seconds of driver-controlled play.

The object of the game is to attain a higher score than the opposing Alliance by scoring your colored cubes on posts, and to build a skyrise where you can also score cubes for bonus points.

Each Robot (smaller than 18”x18”x18” to start) begins a match on one of their Alliance Starting Tiles. A bonus is awarded to the Alliance that has the most total points at the end of the Autonomous Period.

Here is the skyrise reveal video :